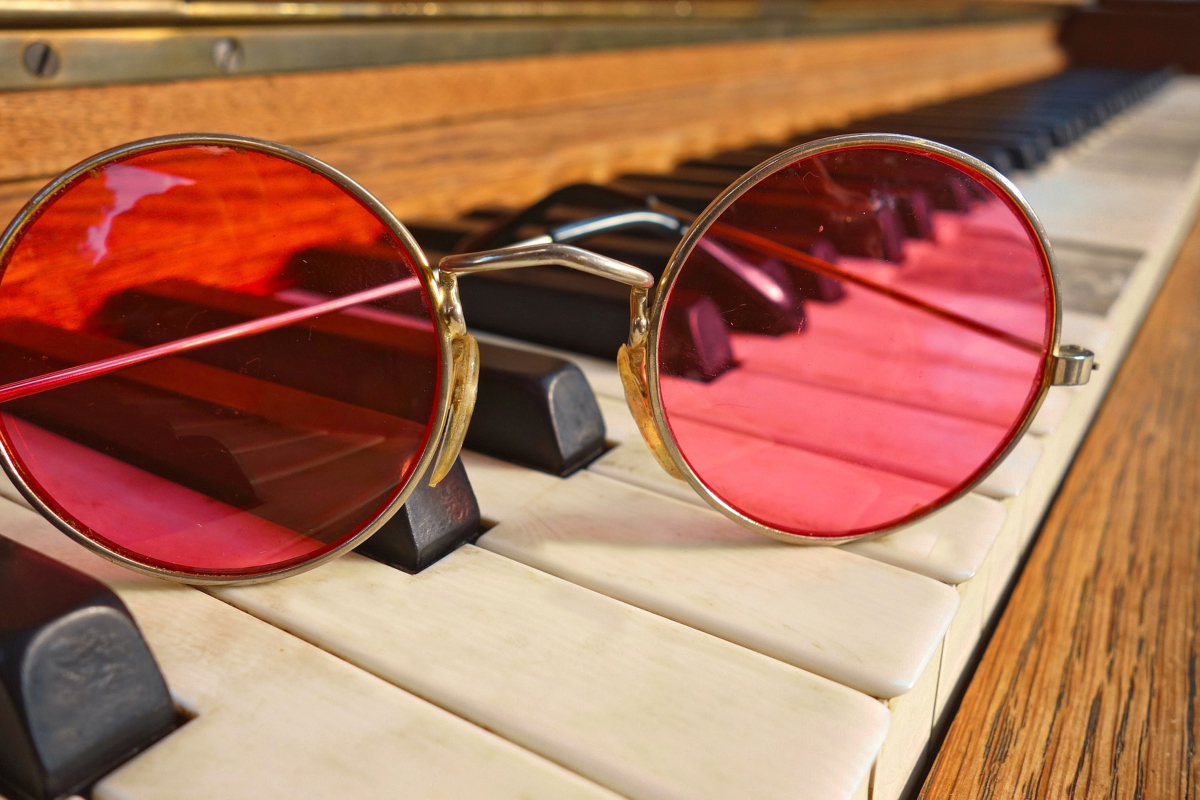 When I was in the third grade I thought it would be really cool to play the piano. My mother played and I loved listening to her.  I wanted to be able to make beautiful music just like her.

I started messing around on our upright console piano. I found some of my mother’s old piano books in the bench.  I quickly realized that I was going to need some help from mom. I asked her if she would teach me. I just wanted to play the piano. It was simply play- having practice habits was the furthest thing from my mind.

My mom was excited that I wanted to learn. Her mother had given her lessons every day after school. Now it would be her turn to teach her daughter. She went and bought me an easier book, the primer- John Thompson’s Teaching Little Fingers to Play.

I Want Glasses Too- just like Mom and Dad!

That same year, I noticed that my parents wore glasses. I wondered what it would be like to wear glasses. I told my mom that I thought I might need glasses myself.

She had my eyes checked, and the optometrist said that I barely needed them. I was slightly nearsighted. We could go ahead and get them. They would help me see a little more clearly. I was excited, I was getting glasses!

A week or so later my new glasses arrived, and we went to pick them up. The frames had a pinkish tone to them. They were as cute as glasses for kids in the 80’s could be.

I couldn’t believe the incredible detail in the world on the way home. There were leaves on the trees! It was like I was seeing everything sharper and more in focus. Glasses were awesome!

The next day at school, I sported my new glasses. It took exactly five minutes to be called “four eyes” by another student. This became a regular thing, being called “four eyes,” and  being treated by the other kids like there was something wrong with me.

I now had an obvious weakness. I wore glasses. I started resenting my glasses, and in time they became a real drag. Have you ever tried to swim with glasses? Come into a warm room after being out in the cold? They can be annoying. It really hurts when you get hit in the face in PE when playing dodge ball. The worst part  for me was being different from the other kids. I didn’t want to stand out because I wore glasses.

Glasses for the Rest of My Life

With my new glasses on, I loved reading books.  Like a nerdy little bookworom, I gobbled up all the Nancy Drew books one after another. Reading constantly in poor lighting can cause quite a bit of eye strain.

Watching TV was also something I enjoyed. As I  watched all my favorite 80’s sitcoms lying on my side, I developed one eye that was significantly worse than the other. Glasses were no longer a possible option for me. They became a permanent fixture on my face.

A love hate relationship grew with my glasses that I have to this day. What started out as exciting had become a problem. I was now stuck with glasses for the rest of my life. 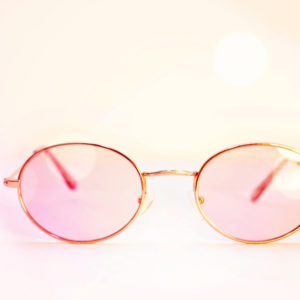 I can picture my third grade self, sitting at the piano in my glasses. Mom and I had exactly three lessons together, before we had our first practice standoff.

Mom taught me the piano lesson, and then proceeded to go to the kitchen to make dinner within ear shot of the piano. My task was to keep practicing what she had just taught me. As I played the very simple piece, I felt I had it down quickly. I was ready for her to take me to the next piece. Her musical ear said otherwise.

“Your timing is off,” she said. “No, it isn’t,” I argued, begging her to let me go on in the book. We briefly went back and forth. Then she gave me an ultimatum.

The choice was mine. Either I could play the song again and count it correctly, and keep working on it- or she wasn’t going to teach me. If I wasn’t going to play it the way she was asking me to, the lessons were over. It was as simple as that.

So, that is how we ended up never having piano lessons together again. Three lessons and we were through. After that, I had to teach myself.

My mother was an exhausted working mom with five kids. One of my siblings has special needs that required a great deal of attention. She had more than enough to take care of already. She didn’t have time to teach piano lessons to a stubborn middle child prone to arguing.

My childish thinking was out of focus. Truthfully, I was just as nearsighted at the piano as I was without my glasses. From my close perspective, I thought that I was playing it right.  I convinced myself that it was so.

Yet from the farther distance of the kitchen, my mother  knew better. Being an experienced pianist, sheknew that the rhythm was wrong. The melody wasn’t clear at all. From my perspective, it sounded good enough.

Our Students Have Nearsighted Practice Habits

This is often how it is with our students. They are nearsighted. At first they think it will be really cool to play the piano. The first couple weeks it’s fairly easy. They are playing pieces! They like the piano, it’s fun.

After a couple weeks,  there is a shifting. The kids realize that most of their friends aren’t learning the piano. They don’t have to practice every day.  They are outside playing or watching tv, or playing video games with friends while they are practicing!

They also realize that it turns out that piano can be hard at times. It’s not as easy as the beginning. It’s taking longer to learn pieces. They are struggling to read the notes. They hate the metronome. They sluff off on their practice and go outside to play instead.

The teacher who had seemed so nice, doesn’t pass them off to a new piece that week. (Because their playing is sloppy.) They are going to have to practice those same boring songs for another week to get their sticker.  Not passing a piece is disappointing. They don’t like the piano anymore. They ask mom and dad if they can quit.

Chained to the Piano Bench, Or So it Seems

They don’t want to play  the piano after all.  It’s become a real drag. Other kids are going out to play after school, and here they are chained to this piano bench. Mom and dad said they can’t quit, since they just bought the piano.

They have a serious problem, it seems that they are now stuck with the piano for the rest of their life. Like those glasses, a nearsighted love hate relationship has begun.

As to my own story, I wish I could tell you that things got easier for me after my mom stopped teaching me. I’d like to say that I was brilliant at teaching myself. I was a self-taught genius- a true prodigy.

If not that amazing scenario- I’d like to say that she immediately went out and hired a fantastic teacher for me.  I spent my childhood loving my consistent growth at the piano, and I became a shining star at the piano.

Or even better than those two stories, I wish I could say that I apologized to my dear mother. Upon my apology, we started working together again. My mother taught me successfully every day.

Mom and I both gave up too quickly. I can hardly blame her. I was childish and stubborn. It was a big task to take on in the first place. She truly didn’t have time. She already had way too many things on her plate.

The bigger life lesson I learned from my own early piano study is not to give up too quickly. Most students are going to be nearsighted when starting lessons. They are going to find it hard, and question if they want to do it in the first place.

Children don’t have the maturity to hear that they are practicing poorly. They will genuinely think they are playing just fine. Why should they need to keep playing that same boring song over and over?

We also have to help our parents when they become too busy  to deal with a stubborn child. Parents are tired and overworked. They don’t want to struggle with practicing. They don’t want to argue with their kids about the piano. Without proper care of both the parents and the student, they will quit.

Learning From a Teacher at Last

It wasn’t until the seventh grade that I finally had a hired piano teacher and a consistent  weekly lesson. When I finally did, my practice habits were abominable. I would try to sightread my lessons when I didn’t practice. Of course my teacher knew I didn’t practice. Teachers always know.

I greatly admired my teacher’s beautiful playing. I loved taking lessons from her. It felt really special and important to do so. I had wanted it all along, and so I didn’t feel entitled. Nevertheless, she had to undo and try to shape my poor practice habits.

Being nearsighted, can be a real stumbling block for our student. They can be impatient, and lose focus on what they need to improve. Often, they really can’t see or hear what they are doing wrong.

The first thing we can do is recognize a child’s natural impatience.  In doing that, we can give them lots of short pieces that keep them from getting bored.

We can record them and have them listen to their playing. Then we can have them listien to a recording of the piece being played correctly. After comparing the two, we can help them target in on the areas they specifically need to improve on.

We can give them candy-coated metronomes by letting them play with midi accompaniments that can be sped up and down. (Hal Leanard Publishing has amazing built-in capabilities for that in their Student Piano Library.) We can beat on drums together and clap and march, and dance.

We can have them play in groups and ensembles to help with timing, and make it fun with others. We can also play lots of duets with them. We can take them off- the- bench and play music theory and rhythm games. There are so many ways that we can help them improve their practice habits.

We have to lovingly keep our focus on them. As teachers we must keep our clear perspective ourselves, and guard against our own impatience. We must encourage our parents, and not get discouraged when our students are being nearsighted. We can help them see more clearly what they need to do. We can make it fun to practice more effectively and consistently. They don’t need to feel chained to the piano bench.

Here is an Off-the-Bench activity for for when your students is getting frustrated with putting the hands together.

Here is an Irresistible Dice Game for Target Practice

How do you help students that are nearsighted in their practicing? I would love to hear your favorite go-to ideas. Please tell us about them in the comments below.