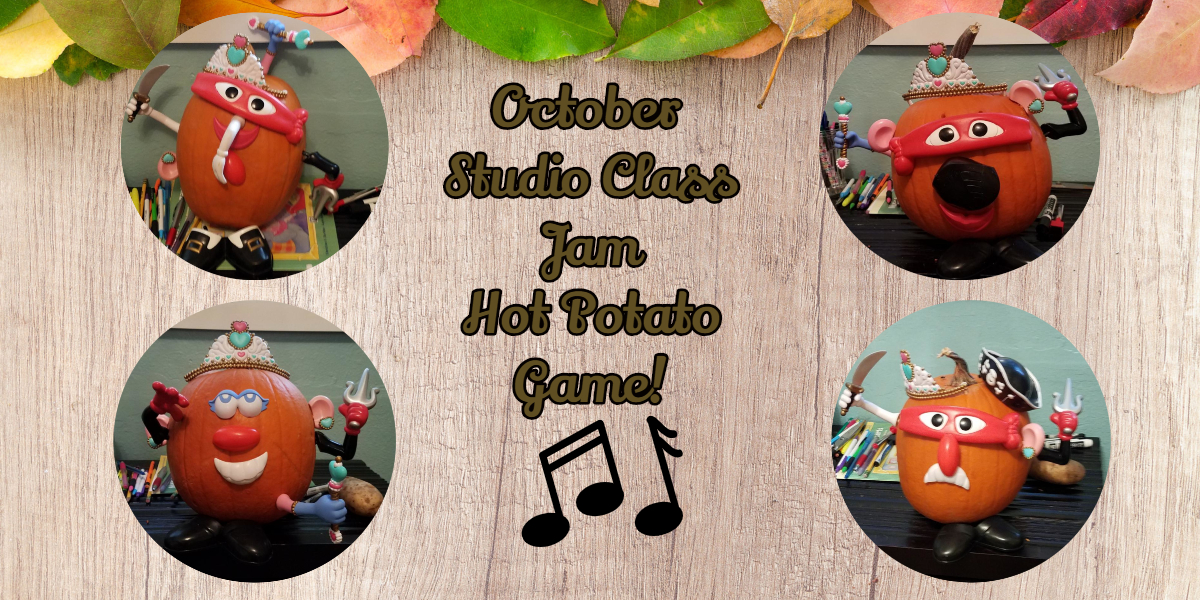 Autumn in Idaho is Breathtaking

This time of year is really my favorite. In the Treasure Valley here in Idaho, we enjoy many moderate days with lots of sunshine. The trees are changing their colors. It’s really stunningly beautiful. I love getting out my sweaters and drinking my tea in the afternoons when the students arrive.

As the leaves are falling, and we have settled into a routine in the studio, it’s fun to interject some harvest/Halloween inspired games. This year we started a new series of in-house mini recitals called Studio Class Jams.

What are Studio Class Jams?

The purpose of Studio Class Jams is for students to perform for other students in a small nonthreatening environment. Our Christmas and Spring recitals are good sized and for many students they can be intimidating.

I usually let my parents be present in lessons at any time, but I shook things up a little for the Studio Class Jam. Unless the parents were part of a parent/child class, I told them that they couldn’t come to the Studio Class Jam.  This guaranteed it would stay small and less scary. I know this is weird for some of my parents. I trust that it will prove it’s worth over time.

Each student was required to perform a solo of their choosing from their methods books that they had recently learned. Instead of having the students come to their regular scheduled time, we offered  four one hour sessions to choose from over two days. This meant the students would be mixing with other students they don’t normally interact with.

I knew to make it a jam, we would need to do more than just play solos- we should interact. As it is still early in the school year, I decided to wait on having  the students play in a  piano ensemble or do a group improvisation. We will be playing in ensembles for the Christmas Recital, and we will have two more jams this school year. We will do some blues improvisation then.

All of my piano students receive basic singing as a part of their instruction. So, I decided we would sing together flash mob style. I also wanted to play a game. My husband and son’s studios did jam together in the garage rock style. But my October jam looked a little different.

5 Minutes- Treats on the Way Out

I had already prepared most of the students for the flash mob song.  I had been teaching them the song The Best Day of My Life by American Authors. We had been learning the  simple movements at the beginning of class.

This was a part of my October owl song series. (Whoo-Whoo-oo-o-oo!) I had also already had them practice singing in two sections.The only class that hadn’t gone over it prior were my more advanced piano students because we had needed every bit of class time. However, I knew they were older and would be fine with learning it at the jam.

The  arrangement and recording was from Pop Kidz: 8 Mega Hits arranged for unison voices,  by Andy Beck/Alan Billingsley / and Greg Gilpin. The students love this song and we had a lot of fun singing/dancing and yes, jamming to it. Any present parents joined us on the floor for the song! Great Icebreaker!

Next each student performed. I had allowed 30 minutes for this, but we were done in about half the time because their pieces are so short. (This gave us more treat time later.- Yippee!) They were each required to play on the grand piano, introduce themselves and their piece, play from memory, and bow/curtsy at the end. Even with it being so casual and laid back, there were still a lot of nerves in the room! I was glad that we were doing this. It’s hopefully going to make the Christmas recital easier.

Then it was time for the game. YAY!! Hot Potato with a twist.

I had a really fun playlist (thank you Amazon Prime music-I love you!) Halloween songs. (Pirates of the Caribbean, Ghostbusters, The Great Pumpkin Theme, and Monster Mash.) As the kids sat in a circle, they had to pass the potato around the circle until the music stopped.

When it stopped, I asked them a question from my wall white board staff. They had to identify a note, or chord depending on their individual level. When they got the answer right they got to choose a Mr. Potato Head part to put on a pumpkin. (I already owned the larger jack-o-lantern parts.)

Then we started the music again and passed the potato, asked the next question until every kid had a turn and the pumpkin was finished. Then of course we took a picture with the creation. This game was a blast and it was easy to modify the questions on the fly for each kids level.

After the game it was treat time. I brought them into my living room/waiting area and we had hot cider and treats the kids brought. My husband and sons students joined us and we had a little fellowship between different classes of students and any waiting parents. Our first studio class jam was a hit and we will be doing more throughout the year.

Studio Class Jams are going to be a Thing in my Studio! Do you offer group studio classes? What kind of favorite activities do your students enjoy? Please share in the Comments! I would love to hear your fun ideas!